The One with the White Side ( Short Notes)
I have gone totally to the white side...
My Pee Cee has died on me and I have lavished on this...
Behold the new member of the family the Imac. 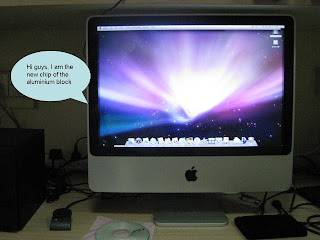 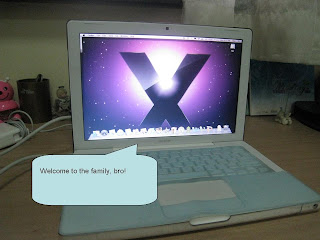 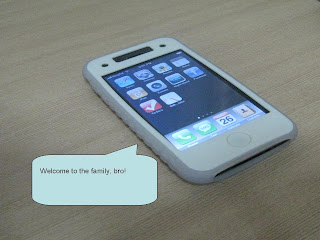 Muahahaha... I am really off my bonkers with all the edited pictures and speech bubbles

The One with the Chinese New Year reflections

Before we know it, it is already the end of January and the chinese new year, the year of the ox in another 12 hours time.
I looked back at my years of blog entries and felt a sense of nostalgia. I first started the blog in 2004 as part of my attempts to bond with my sec 3 IJ form class students. Since then it was a channel for me to reach out to them and shared with them my thoughts on certain things that was happening in the school, in the classroom and of course on some of the colleagues. After I left IJ in end 2005, the blog continued to serve as a way of maintianing contact with some of my ex-students who were keen/interested/curious to know about my being and things that I was doing. There were many a time that i wanted to shut down the blog as it has not really serve the purpose that I wanted to do in the first place but now it is more of a cesspot of grievances and grudges and unhappiness. It is almost like a negative online tome of grievances with my name capitalised on the front cover. A online tome that had even me resisting going in to look. There were the occasional entries about happy things, but I realised over the years there were more of the negatives than the postives. From the 90 posts in 2006, to 20 in 2007 and finally in 2008, the entries had been insipid and uninspiring to read. Have I really gotten caught up with all the cloud of unhappiness that there is nothing postive I can write about? Am I so unhappy about the things that I have now that I am now cynical to all the things that I have?

My wife stared at me yesterday - nothing surprisingly, though, but she was looking at my hair and proceeded to brush her fingers through my hair and then a slight tug. She looked at the strand of hair and commented,"OMG, a strand of wihite hair" - much to my horrors, and that (meaning the hair) was not all, there were more hair ( white ones I mean). Signs that i am really getting old. My wife joked that a couple of reports, and my constant worries over my work had resulted to me turning to comfort food ( ie spoilling my plans for a trimmer me in 2009) and my hairs turning white. SIGH.. maybe it is about time to really ponder about "acting my age" :P